Intrepid Urban Farmer: Right at the beginning of the payoff, elated by the look of things (and anticipating) 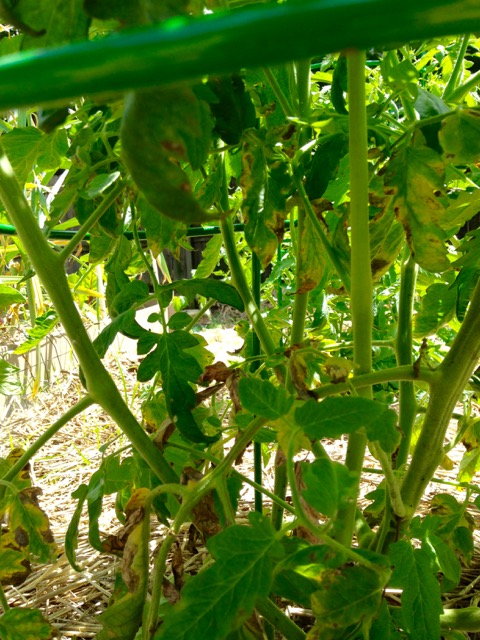 Here we are. Right at the beginning of the payoff. The garden has been in the ground for about six weeks. For the first time, in quite a few years, I am elated by the look of things in the back yard of the Italianate on Russell St.

The plants are all doing well (except the Swiss Chard *sigh*). Even the bug population seems to be a little less enthusiastic this year. I can’t figure out why, but I’ll take it.

The tomatoes are really going crazy. I just spent a couple of hours pruning the vines. All you have to do is sit down on the ground next to each plant and take a good hard look at it, up close and personal. Which of the vines is, or is not a player at this point. Does it have fruit on it? Does it have a few blossoms? Leave these vines alone. If it looks like a wanna-be compared to the others vines, take it out! Don’t be shy. Take this opportunity to resolve a few stress issues (maybe you’re having trouble with a co-worker, for example). Go at that plant and be fearless! Wield those pruners like a machete in the Congo (well, maybe not that fearless). Tomatoes are remarkably resilient from this kind of treatment. I think they might even actually like it.

There should be two or three major vines remaining. Prune off any leaves that look yellowed or blighted, and also any that are laying on the ground. This is an important thing to do, as it forces the plant to shoot more energy into producing flowers and fruit. In addition, the plant needs room for air to circulate, as this helps prevent blights. Morning dew and heavy rain burn off a lot faster and you’ll have less trouble.

Another thought along this line of preventing excess moisture is that it is a better plan to water your tomatoes with a garden hose or soaker hose. I think a sprinkler on tomatoes is generally a bad idea. I know, I know–when it rains it’s ok. Well, we can’t help that now, can we?! The first rule of gardening is the fact that we (humans), are totally under Mother Nature’s thumb. We can’t control anything, but we can do little things that make us feel important and effectual.