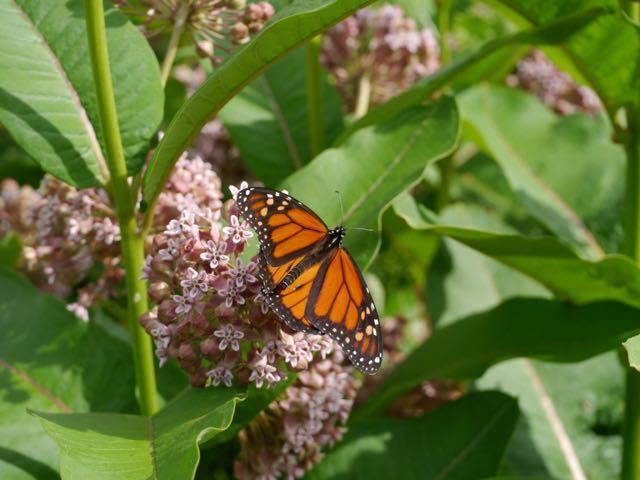 UNTIL RECENTLY, if someone said “monarchs” I would probably free-associate and think “milkweed” and then “migration,” and all those elements are in the title of the new book, “Monarchs and Milkweed: A Migrating Butterfly, a Poisonous Plant and Their Remarkable Story of Coevolution,” by Cornell professor Anurag Agrawal.

But after I read it, mention of the word “monarch” started bringing another phrase to mind, too. Now I also think “arms race,” because that’s what’s been going on with the butterfly and its host plant over the millennia—a fascinating power struggle that includes impressive chemical weaponry and tactical maneuvers, a story of what seems like survival against all odds.

Dr. Agrawal, from the Department of Ecology and Evolutionary Biology and the Department of Entomology at Cornell, studies the ecology and evolution of plant-insect interactions. He joined me on the July 3, 2017 edition of my public-radio show and podcast to help us get to know the monarch and milkweed a little better. Read along as you listen, using the player below (or at this link).

Q. I have to say, I already thought I knew a little bit about monarchs, and that they were impressive–but I had no idea just how impressive till I read the book. How long have you been studying them?

A. I started studying monarchs and milkweeds in about 2000, so about 17 years.

Q. Wow. A little obsession is good, right? [Laughter.] Dig deep into something.

So let’s set the scene for people who haven’t read the book yet, and explain why as you say in it that monarchs and milkweeds are having this arms race, and why you say early on that they are “a premier pair to study co-evolution.”

A. To set the stage, maybe the first thing to point out is that all animals, whether they are insects or lions and tigers, ultimately depend on plants for their energy. Plants do the thing: They take sunlight, carbon dioxide and water, and with sunlight turn it into what we call biomass.

Then everything else either eats plants or eats other things that eat plants. A consequence of that is that plants have been under threat for the millennia—everybody’s trying to eat them.

A. [Laughter.] Exactly. And so among ecologists and biologists like myself, one of the things we study is the mechanisms by which plants defend themselves, and so the monarch and the milkweed in a way is a microcosm of what’s happening out there in oak trees, or in our lawns, or in agricultural fields.

The monarch is trying to make its living by feeding on the plant, and the milkweed has over time has evolved these defenses to ward off being fed upon. So that’s where I think the monarchs and milkweeds are what I call “royal representatives” of how nature works.

Q. And then they have this special thing going on because of this fierce chemistry involved. This is not just any old plant, this Asclepias.

A. No, that’s right. Most plants have interesting chemistry. Some of it we use for our nutritional benefits; some of them we use as spices, like chili peppers. Milkweed plants have a whole set of toxins in them, the cardiac glycosides being the main ones. The cardiac glycosides of the milkweed are an extreme example of the chemical toxins that are out there in the wild plants.

Q. …whereas something like 10 or 11 visit the Asclepias. It’s different.

A. Absolutely. Many things of course come to milkweed flowers and they might sip a little bit of nectar, in part because milkweed has a big structure—at least the common milkweed, Asclepias syriaca, stands out with its broad leaves. Many insects will come sit on the leaves and fly away. In terms of the insects that eat the leaves and make their living by eating milkweed, it is a small community.

Q. And those chemicals are a lot of the reason why—and the fact that they are sap-like. So it’s not only the toxins, but they also have a structure that you could get drowned in, couldn’t you? [Laughter.]

A. Something I have spent a lot of time thinking about is the relative importance of the milky latex that is sticky and exudes, versus the toxins. It’s difficult to separate, because the toxins are concentrated in the latex.

Q. We can go back into that deeper, but first let’s meet briefly the monarch. As I said in the intro, people know that it migrates. But it’s not like a migratory songbird if you live in the North, and it goes away in the fall and comes back and hatches a generation on the breeding grounds, and that generation flies south. It’s not like that—it’s a multigenerational annual migration cycle, yes?

A. That’s absolutely right, and I think both types of migration are spectacularly interesting. And just what you said: from the bird’s perspective, because it’s individuals that make the round trip, I think the really compelling and interesting piece is that they may be using their memory to return to very specific areas and locations.

A. For monarchs, the memory is not possible, because it’s the grandchildren or the great-great grandchildren that are returning to the sites that their great-grandparents were at, so they’ve never seen those locations before. That’s what makes that a really remarkable part of that story.

Q. What time of year shall we begin to go through a sort of brief life cycle?

A. We can either start in January or in June, given that we are in June now. [Laughter.]

Q. I don’t know, you’re the teacher and have probably tried to explain it to many people—what makes more sense?

A. In the book I started with January, the calendar year. So it’s winter, and it’s frozen north here where we are, and the butterflies [of the monarch population that migrates to the Midwest and Eastern U.S.] are sitting in Mexico in trees, at about 10,000 feet of elevation. They’re in fir trees.

They’ve been there for about two months waiting out the winter, and they will be there for another two months. Toward the end of February-early March, individual butterflies will fly from Central Mexico to the Gulf States, mostly Texas and Oklahoma and Louisiana, so that’s about an 800-mile journey. By the time they get to those Gulf States, those monarch butterflies are about eight months old. They are tattered; they are faded. They get to the Gulf States and lay eggs on the milkweeds there in March and April, and most of them perish; they die there.

But they’ve laid eggs, so that’s the beginning—the birth—of the new cycle. The eggs hatch, they turn into caterpillars, they feed, they turn into the chrysalis, they turn into the butterfly. In May they then take flight from the Gulf States and fly North, to the Midwestern U.S. or the Northeast, more or less separated by the Appalachian Mountains.

And so those monarchs beginning in September will fly around 3,000 miles, from the upper Midwest and Northeast all the way back to those overwintering grounds in the highlands of Central Mexico.…